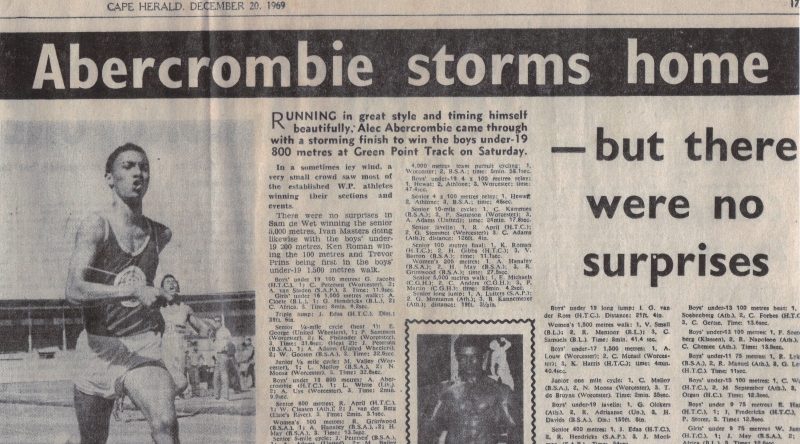 THIS is the final chapter of a two-part series about former star athlete, footballer and lawyer Alex Abercrombie.

ALEX Abercrombie, who was an SA record holder, champion sprinter and high jumper, excelled in the 400m and 800m.

He could not run all these races at school level, so he gave expression to these events at club level.

Because of his versatility, Abercrombie had been asked to be the pacemaker for Rupert Williams, the SA Schools and club champion in the 800m. Williams was also a junior men’s cross-country champion.

“I had to set the pace on the first lap which I did and reached the back straight when Rupert passed me. A couple of runners whom I thought were not supposed to beat me also went by me on the back straight. I reacted and went past them but Rupert was ahead already even though I had closed the gap to the finish line,” recalls Abercrombie.

He subsequently moved up to the 400m and 800m where he had a measure of success. He even competed against the seniors in the 400m. Abercrombie had several coaches, including Colin Barendilla (at Harold Cressy High School), Kenny Roman (his senior) and Eddie May who knew how to get the best out of his charges.

In a caption, to a file photo, the newspaper describes Abercrombie: ‘ALEX ABERCROMBIE – timed beautifully to win the 800m event at the WP athletics meeting at the Green Point Track on Saturday.’

In another article, the Cape Herald devoted six columns to an Abercrombie headline: Abercrombie storms home.

He had won the junior men’s 800m at the same meeting Robin April did in the senior men’s event at the Green Point Track in 1969.

With university studies beckoning, and possibly all the accolades in athletics achieved, it was time for Abercrombie to move on.

Though tertiary education was a factor, it was, in fact, a knee injury which ended Abercrombie’s athletic career.

“We had been training with weights in Kenny Roman’s garage in Maitland when I snapped the cartilage in one knee,” says Abercrombie.

The cartilage injury, coupled with reaching the ceiling in the sport, put end to Abercrombie’s athletics career which on all the evidence proves that he would have been an even better athlete had South Africa been allowed to compete on the international scene.

In 1960, the country had been expelled from the Olympics by the International Olympic Committee (IOC). Harsher sanctions on South African sport would follow in the years to come, isolating South Africa from the world until 1991 when an all-white South African cricket side toured India.  In 1992, South Africa had sent a team to the Olympics in Barcelona, Spain.

“It was time to move on, I was achieving the same results year in and year out, and, as you know, in sport, such as athletics, you have to train twice a day five times a week.  After matric (1969), I had to look towards a career beyond athletics,” says Abercrombie.

He would have studied electrical engineering under the permit system at the predominantly white University of Cape Town, but he was turned down.

“I was fascinated with electricity as a matriculant; the physics of it and so on. Initially, I was offered apprenticeships in the motor trade but things worked out differently. A friend of mine, who later became a journalist in Namibia, recommended that I should study law at the University of the Western Cape,” says Abercrombie.

He completed his legal qualification in 1973 and was admitted as a Conveyancer in 1980.

Off the track achievements

Like the star athlete he was, Abercrombie raked in the achievements in the workplace.

Abercrombie, publicly and on paper has an impressive record in the legal fraternity. He had worked with the late Percy Sonn, the National Head of the Scorpions and president of the International Cricket Confederation (ICC) and with the late Dullah Omar, the former Minister of Justice and Transport.

He was also a senior partner in Cliffe Dekker Hofmeyr Inc.

Football, though, was another great love of Abercrombie who now enjoys an active retirement.

Abercrombie’s football career started at St Raphael’s in Athlone. Later the club merged with Wheatfield Rovers to form Belthorn United just up the road from where he had lived in Gleemoor.

“I played in different positions as the team required of me. Sometimes I would be on the wing or I would be playing as a defender. Being tall and having the speed gave me an advantage over many football players,” says Abercrombie.

He later joined the amateur ranks of the Glenville Football Club where he had been approached by Fred Eagles to join the professional ranks of Glenville. That is where his football career ended before moving into the administration side of the sport.

Abercrombie’s CV, both as a lawyer and football administrator, is as tall as the man himself.

He serves on several boards and ‘works’ in Gaming. He is also the Deputy Chair of Council of the College of Cape Town.

He was also in Lusaka in 1987 to discuss unity in football.

He first served as vice president and public relations officer of the Western Province Football Board and SAFA (WP) in 1987, a post he held until 1997.

He was a member of the Constitution Committee which drafted the South African Soccer Association’s (SAFA) Constitution.

Abercrombie was presented with a Special State Award by President Nelson Mandela for his contribution to South African football in 1998.   In 2001, he received a Special Presidential Award of Recognition from SAFA.

In 2016 a football injury incurred in the early 1970s caught up with him when he dislocated his hip. He subsequently had a hip replacement in August 2016 from which he has recovered.

Abercrombie is up and running again, so to speak, and is able to drive his own vehicle and he walks freely without any aid. He looks a picture of health.

He lives in Rondebosch where he enjoys his ‘retirement’ with his wife Jenny.

He runs several businesses and serves as a director on numerous organisations. 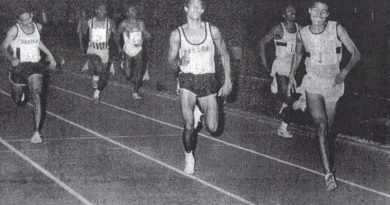 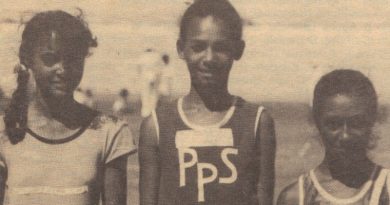 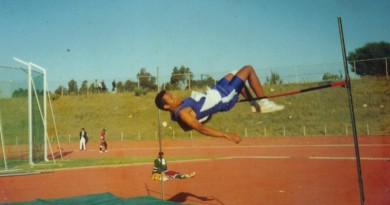