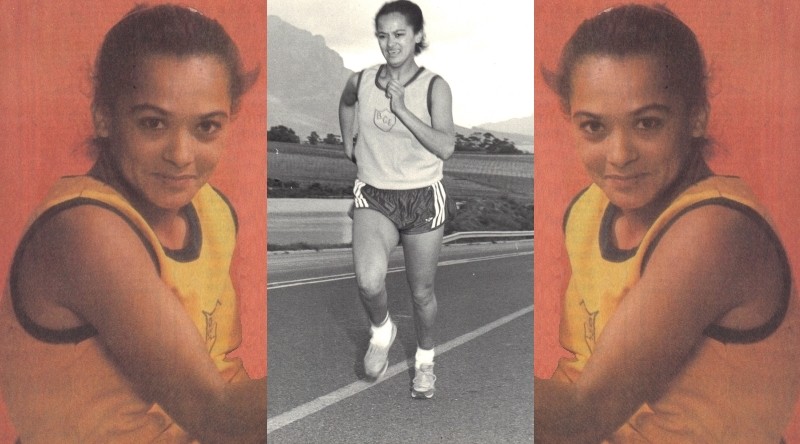 JOWAINE Lategan and her coach Allan Parrott defied the belief that athletes from the South African Council on Sport (Sacos) were inferior and in need of “superior coaching”, by winning a gold medal at the 1996 Comrades Marathon.

Lategan and Parrott tied the knot in March 1989 and the husband-and-wife team worked athletics wonders since the early days of Ida’s Valley in Stellenbosch in 1983.

From an inter-house athletics meeting at Lückhoff High School in Stellenbosch, in 1983, Jowaine worked her way to a gold medal at the 1996 Comrades Marathon, the year Ann Trason of the United States won the race.

She was in the august company of Trason, Maria Bak, Valentina Shatyayeva, Carolyn Hunter-Rowe and Berna Daly.

The first five female runners who crossed the finish line won gold medals. Jowaine Parrott was fourth and the first South African female runner to cross the line in the international event in 1996.

Frequent runs to the corner shop

Her success, of international magnitude, started with a run to the corner shop and back in Ida’s Valley, Stellenbosch.

“I grew up in my grandmother house and under her care. As one of my errands, I had to run one kilometre from our house to the shop. These trips were normally quick as my grandmother needed one or other ingredient for the cake, mostly baking powder or tobacco for my grandfather’s pipe,” says Jowaine.

Jowaine still does not know whether this high-intensity aerobic training was the reason for her later successes or not.

“All I know was that I enjoyed it and it sure beat the chore of polishing floors or doing the washing which my other sisters had to do,” she recalls.

The young Jowaine ran her first 800m race at the inter-house meeting in 1983 and collapsed after 700m.

A teacher at the school (Vincent Parrott) was willing to give her another chance and recommended that she join the Stellenbosch Amateur Athletics Club in 1984. Jowaine found herself in the stellar company at the club which included top middle-distance athletes Priscilla Windwaai, Jennetta Abrahams, Elizabeth Meloyer, Anna van Wyk and Marina Opperman.

The club coach was Allan Parrott, a brother of Vincent’s.

A new goal in life

“When I first met the coach, Allan Parrott, it was quite evident that his no-nonsense approach to running and his vast knowledge of athletics were the very reasons his athletes respected him. Within three days I found a new goal in life – to gain the respect of my fellow athletes – and I found someone who could help me to achieve that goal,” remembers Jowaine.

Jowaine’s immediate goal was to stop running in the shadow of Windwaai and Abrahams.

“I lived for almost two years in the shadow of Priscilla (Windwaai) and Jeanette (Abrahams). But as time went by, Priscilla became more and more erratic as far as training sessions would go – she would easily skip training sessions,” said Jowaine.

In a 4km road race in Elsie’s River in 1985, Jowaine finished nine seconds behind the winner Windwaai and one second behind Abrahams.

“In an 8km road race organised by the club in October 1985 I experienced for the first time what it was like to win a race – the elation was one that I could easily become addicted to. “From this point onwards I became a winner of races and, for a number of years, I would virtually become undefeated in cross country and road races,” recalls Jowaine.

Jowaine broke into the big time of schools athletics in 1986 when she was selected “as the fifth runner” in a team of five athletes to represent the Western Province Senior Schools Sports Union (WPSSSU) at the South African Senior Schools Sports Association (SASSSA) Cross Country Championships held in Great Brak River near George.

The SASSSA cross country event was held from Monday to Friday. The races were run on a Monday, Wednesday and the relay was run on a Friday.

“This achievement – SASSSA colours and captain – I still regard as one of my biggest achievements of my running career – up there with my Comrades Gold and the All Africa Games Marathon Gold Medal,” said Jowaine.

Jowaine had high praise for her team mates Meyer, Klein, Williams and Zelda Muller, but sadly “they did not realise their immense potential they showed early on”.

She passed matric in 1986 and enrolled at the Athlone College of Education in Paarl in 1987. This was the college closest to Stellenbosch, but she soon learned that it was the one most difficult to get to, if you had to rely on public transport. So after two weeks, she transferred to the BelIville College of Education.

Her running career continued to blossom while at college and she tasted success in almost every race she ran in the Western Province or Boland.

During, 1987, the South African Amateur Athletics Board (SAAAB) implemented a series of Road Running Championships consisting of the 10km, 15km and 21.1 km.

She won the first ever 10km Championships and became the champion over 15km as well as 21.1km.

“I was also mysteriously beaten by two ladies I never heard of before or afterwards, in the 1987 edition of the Paarl Mountain Endurance Race,” recalls Jowaine.

“The one long race that I ran during this time, and that was really dear to me, was the Paarl Mountain Endurance Race – an 18.4km race starting in the main road in Paarl, up the Jan Philips Mountain path and back to the City Hall via the main road again.

“Initially, winning this race remained out of my reach. In 1984 and 1985 it was won by Sharon Klein, who at the time was almost impossible to beat. In 1986, Priscilla Jonas, came from nowhere to snatch a four-minute gap and victory from under my nose in the last 4km of the race.

In 1988, Jowaine was selected as a member of the Sacos athletics team, the highest honour that could be bestowed upon any sportsperson in the Sacos fold. At the Sacos Sports Festival athletes could only participate in track and field athletics – there was no road running. David Snyders, by that time a 2:20:47 marathon runner and Jowaine were included in the team because of their achievements and performances on the road.

In 1989, she won all the national road running titles on offer in the South African Amateur Athletics Board.  She was also a winner of the Wembley 15km road run.

In the same year, Jowaine also won the Sportsperson of the Year Award for her college and obtained her teaching diploma from Bellville College of Education (which in the meantime had moved to Kuil’s River).

Given all her successes and in light of the newly formed National Sports Congress (a sports organisation which aimed to forge “unity” among black and white South Africans), Jowaine pondered new challenges.

“There was one thing about competing in the Sacos fold, you did not switch allegiance easily,” said Jowaine.

The Parrotts made the switch from the WPAAU, an affiliate of Sacos to the WPAAA, the athletics association regarded as the establishment.

In 1989, numerous top athletes left the Sacos fold. Even more left in 1990. Whether one wants to call it defection or switching allegiance, a new South African sports order was in the making with the National Sports Congress (NSC) outmanoeuvring Sacos in the ensuing years as the controlling body of sport in South Africa.

In 1990, Nelson Mandela was released, and a new country was imminent. The NSC had taken control of the minds of sportspersons, if not the sport. Sacos were still making the usual theoretical, yet relevant, arguments about the sport and why they believed participating in international sport was too soon. Sacos punted the idea that coaching structures and all sportspersons had to be up to international standard before embarking upon international sport much later than 1992. It was a strong argument that did not have the backing of all South Africans.

Jowaine’s first race under the new body, in the green colours of Celtics Harriers, would be the 1990 Safari 21,1km race in Wellington in the Western Cape.

She would go on to rack up an impressive athletics CV which included winning the Paarl Mountain race, All Africa Games marathon, the Foot of Africa, the Soweto Marathon; clocking the fifth fastest time in the Two Oceans Marathon; running her personal best time in the Berlin marathon in 1995 (2 hours 41 minutes and 59 seconds); winning a Comrades gold medal; and being a three times runner-up in the Two Oceans Marathon.

Her ability to train hard and persevere bore fruit at the time of international competition in 1992.

By 1996 her career had drawn to a close. Jowaine now involves herself with school athletics, schools cross country and senior athletics and road running in Kwazulu-Natal where she, her husband and two sons live. 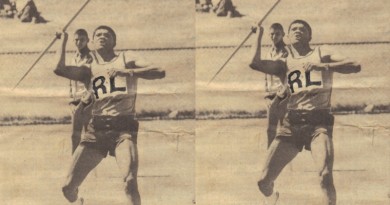 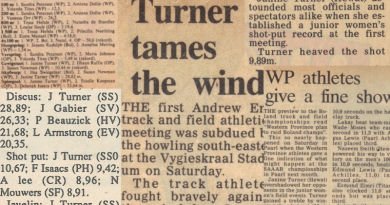 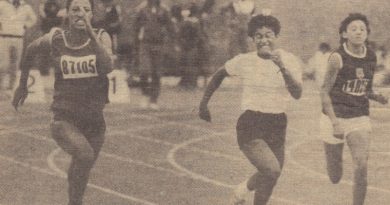 Sizzling Sandra burns up the track