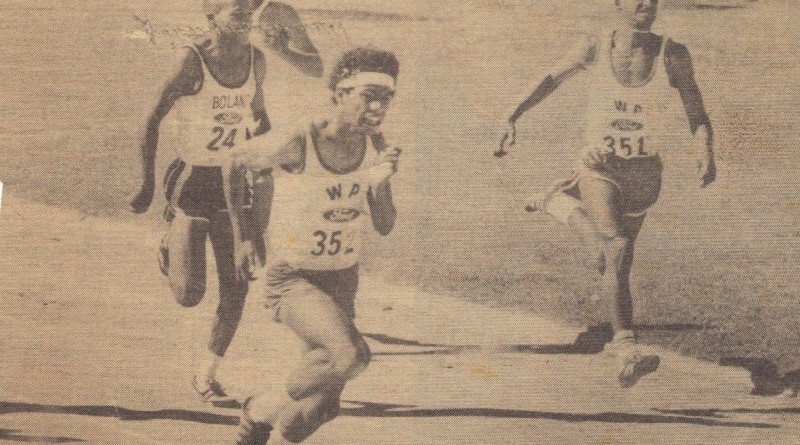 SAMUEL Wilkens of Bishop Lavis High and Havilyne Elders of Bellville South High were part of a dynamic pair of Western Province Senior Schools Sports Union (WPSSSU) sprinters in 1982, Andre Alexander and Naziem Moos being the ‘elders’ in the boys open.

In the age groups below Alexander and Moos, you had Kevin Africa and Shaun Henry (under 17), Wilkens and Elders (under 16), Antonio Burrows and Francois Cleophas (under 15).  They were a pretty hot lot on the grass track of Athlone Stadium.

On the Easter weekend of 1982 at the South African Senior Schools Sports Association’s (SASSSA) athletics meeting, conditions at the Athlone Stadium, for a change, favoured the sprinters. The wind, gentle as it was, came from the Atlantic Ocean – the north-westerly wind. In the words of a revered senior sprinter: “It was a good day for sprinting.”

On that day, Andre Alexander of Spes Bona High wiped the floor in the boys open with a scintillating time of 10,6 although newspapers reported a time, with the caption to boot, a time of 10,7 seconds in the 100m. The record books logged a time of 10,6 secs. Quick and deserving of the man’s pedigree which was not in question.

Alexander was a powerful and “choppy” sprinter, his cadence moving along beautifully like a cat on a hot tin roof or like a bloke running on hot coals.

Elders had a quick and rhythmical cadence movement, running upright, with his ankles flicking along the surface of the track, Elders was good to watch. His headband, it seemed, gave him extra lift/vooma, like the character in the Jericho Mile.  It seemed to have motivated him to run faster times.

Wilkens, for his age, was an assertive character. He had guts and power. He also competed with a headband, albeit a green headband, in the colours of Bishop Lavis. Having spent several years with Elders, I had never asked him the question whether he, Elders, ran with the headband, in subsequent years, in honour of his WP teammate Wilkens who died tragically in an accident, as a pedestrian in the winter of 1982.

Elders and Wilkens were the joint record holders of the SA schools boys under 16 100m record of 10,9 secs in 1982, the day conditions were good at the Athlone Stadium.

Those were outstanding times, for a boy aged 16 (under 17) that year in 1983. The SA records stood. It was also the year when Elders beat Clement du Plessis, Kevin Africa and Aladin McLean of Eastern Province in the sprints at the SAAAB Track and Field Championships at Curries Fountain, Durban.  The next season McLean defected and became the junior men’s sprinter with the establishment.

That same season, the name of Caval Marthinussen landed on the pages of the record books. Marthinussen was Andre Alexander’s main rival for two years in the schools sprints at Athlone Stadium. He arrived, on a hot Saturday afternoon, at the Vygieskraal Stadium dressed in a Hawaiian shirt, pants and a closed sandal. Marthinussen took off his summer outfit and donned a vest, shorts and spikes.  In the manner that he was, Marthinussen politely clocked 10,6 secs in the 100m. He did not run the final and left the stadium. He made his point, never to return to sprint again. What a talent!

So, Elders and Marthinussen were joint record holders in the 100m. Elders, however, had the 200m record all to himself – 21,7 secs. Craig Steyn of Stellenbosch joined the 100m list as a very young junior men’s sprinter. Steyn and Elders had a bit of a sprint battle in Elders’ last year as a junior – the one beating the other.

Of course, we now know Shaun Vester’s arrival, later, changed the face of the sprints.

We might rave about Terrence Smith, Shaun Vester and Craig Steyn, but Elders was a true champion of his time, both in his age group and beyond.

He had gone into semi-retirement in 1986 but returned with a measure of success in the late 1980s as would be seen by the newspapers cuttings.

He studied at the University of the Western Cape where he graduated with a teacher’s degree. 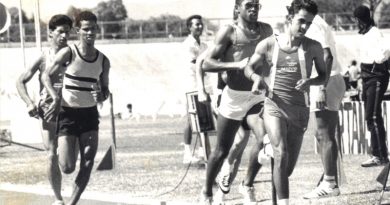 Top achiever Mark Frank is a champion of the underdog 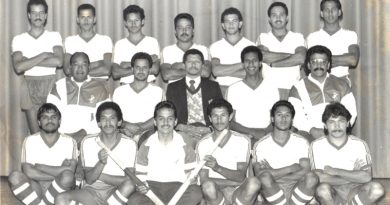 Allan Jacobs’ passion for the game did not die