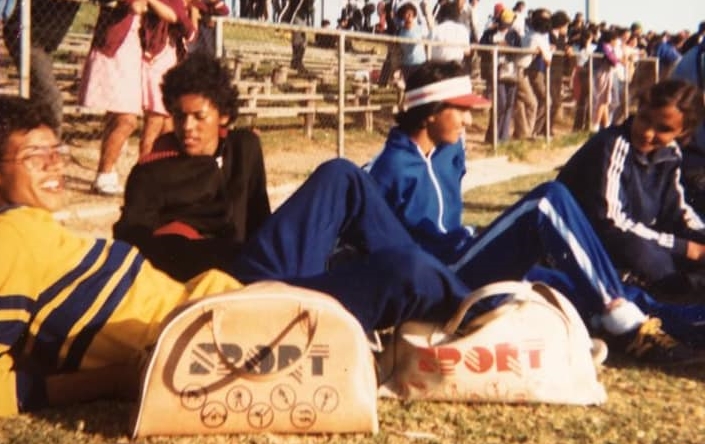 SHE may not have been tall, but Gillian Kay (pictured in peak cap) always appeared to be running tall – with elegance, poise and grace.

With her arms swinging past her hips as a sprinter’s arm action should at a 90-degree angle, she oozed class. She made sprinting look easy while running flat out on the grass track of Athlone Stadium between 1978 (Std 7) and 1981 (Std 10) and representing Livingstone High School and the Western Province Senior Schools Sports Union (WPSSSU).

Her red shorts and red school badge on her vest stood out along with her short, bobbing black hair.

This is pretty much how Kay (Taylor), in the absence of an action photograph, is remembered as an athlete to be reckoned with in the sprints.

Hardly participating in athletics at primary school, her start to the sport at high school was indeed bright, especially given the fact that she had “to compete against that SP girl”.

The SP girl turned to be Sandra May of South Peninsula High School, the daughter of sprint coach Eddie May. Kay was up against a formidable father-daughter combination.

May was a red-hot sprinter and difficult to beat.

But Kay didn’t do too badly against May, upstaging her on the odd occasion.

Kay managed to beat her in the girls’ under-15 100m (12, 9 seconds) at the 1979 Western Province Senior Schools Sports Union’s Champion of Champions. May pulled it back in the 200m with a time of 26,5 seconds. This was on the grass track of Athlone Stadium with the south-east wind being any athlete’s ultimate competitor.

May was an equally sublime athlete.

At the South African Senior Schools Sports Association (SASSSA) meeting on the gravel track of the Dal Josaphat Stadium in Paarl in 1979, May’s tenacity shone through and she won the 100m (12,9) and the 200m (26,6).

At the same SASSSA championships you had the sprint talents of Suezette Arendse representing Boland in the girls’ open sprints, and Ingrid Arendse of WP in the girls’ under 17 sprints.

The two-year competition between May and Kay ended in 1979 as May and her family emigrated from South Africa to Canada.

May’s move paved the way for Kay to dominate the sprints during the 1980 and 1981 high schools’ athletics season.

In 1980, Kay won the girls’ under-17 100m at the Champion of Champions meeting followed by B Louw of Grassy Park and E Daniels of Zeekoevlei.  Daniels won the 200m with Kay second and Louw third.

However, at the SASSSA championship at the Athlone Stadium in 1980, Kay set the record straight by winning the girls’ under-17 100m in 12,5 seconds and the 200m in 26,9 seconds.  Daniels was second.  Wynona Europa was third. Technically, Kay was still under 16, but senior schools did not have an under-16 age group for girls at the time. In fact, Kay had broken the SASSSA 100m record in the heat with a time of 12,4 seconds.

In 1981, Kay again won the girls under-17 100m and 200m in her second year as an under 17 athlete. Alexander Sinton’s Dianne Carelse (Morgan) was second. Carelse came onto the scene for the first time in high school athletics in the sense that she was placed higher in the order of her competitors.

“I didn’t consider others as rivals. I just enjoyed running so I did my best to make my school proud”, says Kay.

Kay tells another interesting story. “In 1980, I injured my right ankle while training, and Iqbal Surve who was at school with me managed to find a kombi and took me to his uncle who was working as a Doctor at the day hospital in Hanover Park. I was worried that I might not be able to run at the champs in 1980,” she says.

As it turned out her ankle was sprained and had to be bandaged.

“To crown it all, I was drawn in lane 8 at the Champs and told my friend I was going to come second.  But when the gun went off, I sprinted flat out from the blocks,” says Kay.

Kay and Carelse represented the WPSSSU in the girls’under-17 age group at the SASSSA championship in Johannesburg in 1981. Kay and Carelse were second and third respectively in the 100 and 200m behind Transvaal’s V Lucas and E Parker.

Kay matriculated at the age of 17.  The same year she had one race at club level at the Athlone stadium and won handsomely before quitting the sport.

“It was Bernard Adams who introduced me to club athletics, but I only had one race at the Athlone Stadium in 1981 as travelling to the venue on Friday nights was difficult,” remembers Kay.

Kay’s “retirement” in 1981 paved the way for Carelse to become the premier sprinter in the girls open sprints in 1982, winning at the Champion of Champions and at the SASSSA Championships at the Athlone Stadium.

She only realised her potential at high school, at her first try, when she won her “races with ease” at Livingstone High, she says giggling.

She enjoyed athletics so much that she trained before school, during intervals, and after school.

At Livingstone, she was in excellent athletics company which included one of the greats of the sport, the versatile Bernard Adams, May Pinto and the junior athlete Shaun Henry. 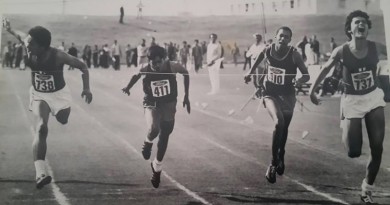 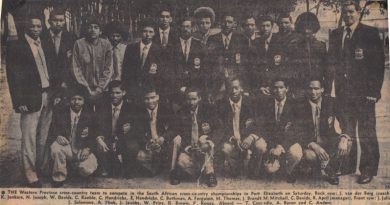 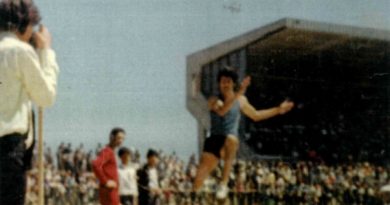