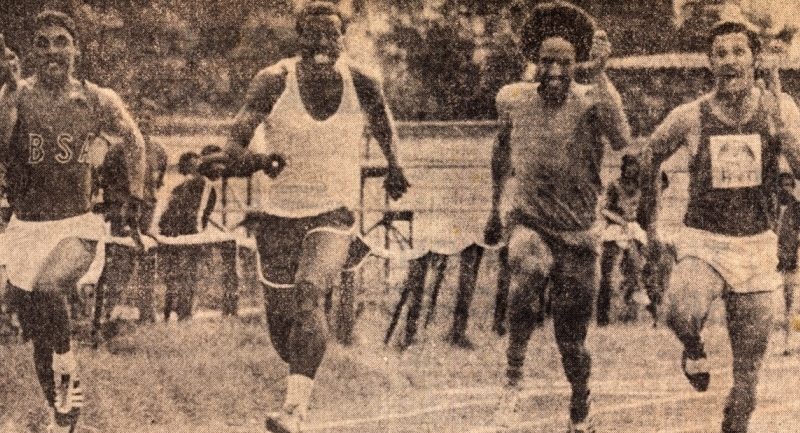 This is the second chapter of a four-part series about former Eastern Province sprint champion Gareth Mclean, pictured far right in the featured photograph. (Read part one here).

MCLEAN’S interest in the sport grew when he attended a high school’s athletics meet with some friends when he was about 12 years old. The announcement of the Eastern Province athletics team to Cape Town also motivated him to compete as an athlete at high school.

“I remember some of my friends and I staying out of school one day, in order to go and watch the high school’s athletics at the Wesbourne Oval. I was about 12 at that time. I was captivated by the sprint races. The speed and grace of the big boys as they powered down the track fascinated me. When the announcer called for the boys open 100m final, I was sitting against the fence next to the track in order to have a better view. Those athletes seemed larger than life. During the interval, we went onto the field to see them up close. They were our heroes. I can still remember their names as if it were yesterday. I knew then that I also wanted to run. After the meeting, the Eastern Province high school’s team was announced to travel to Cape Town for the South African Senior Schools Championships.”

His enthusiasm for athletics deepened as he followed the sport in the Eastern Cape edition of the Cape Herald newspaper in 1969. It was then that he saw a picture of Kenny Roman winning the SA senior 100m title.

“Roman had beaten our boys that we regarded as our heroes,” recalls Mclean.

The next day he started training.

“I did not know much about training methods, but I went to run a few miles every afternoon after school and did push-ups. I bought the Cape Herald every week and read about Cecil Blows, Kenny Roman and others. They made the sports pages on a regular basis and were my new heroes. At school, we talked about Kenny Roman. One article showed Kenny Roman doing weight training in a garage at his parents’ house. That same evening, my father made me my own set of weights to start with. It consisted of an iron bar fitted into two paint cans filled with cement. I don’t know how much it weighed but I could do bench presses and squat.”

Mclean was an EP sprint champion at high school between 1967 and 1970. He remembers the meetings being held on a rugby ground.  The surface was poor but the competition fierce.

“In 1970, representing Paterson High School, I had won the boys under 17 100m and 200m races at the EP Schools Championships at the Jubilee Park grounds in Uitenhage,” said Mclean.

He felt prepared and ready for the SA schools meeting where he ran into WP’s John Wippennaar.

“I won the heats of my 100m and 200m races and noticed a tall WP sprinter winning the other heats. My times in the heats were faster so I did not worry too much. However, I was beaten into second place in both the 100m and 200m by Wippenaar. There was a feeling of disbelief in the Eastern Province camp as nobody expected me to lose. It was a bitter pill to swallow. The loss to Wippenaar humbled me and I realised that competition would only become tougher and that I would have to work twice as hard as before,” said Mclean.

Mclean qualified for the EP schools’ team again in the boys under 19 age group in 1972 to Cape Town.

On arrival, Mclean was disappointed that there was no Wippennaar at the SA schools meeting. Instead, the Charles twins Abraham and Henry and an A Dollie (WP, second in the 100m) awaited him.  Mclean won the 100m (10,8 seconds) and 200m (22,5 seconds, equalled the record). K Kleinsmith of WP was second in the 200m.

GT Moodley of Natal won the boys under 19 400m with Abraham Charles of WP second.

Even though there had been no Wippennaar in the race, Mclean got a measure of satisfaction in that he had equalled the boys under 19 200m record of 22,5 seconds held jointly by Herman Gibbs and Lawrence Jacobs.

By then Mclean’s future in the senior men’s sprints looked promising. 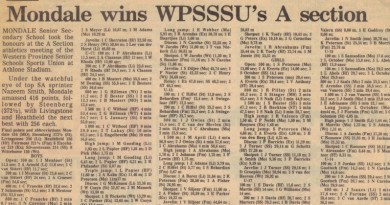 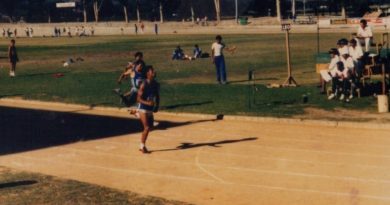 Craig Steyn stamped his authority in 1985 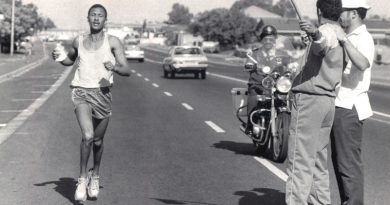 A question of time for top gun John September