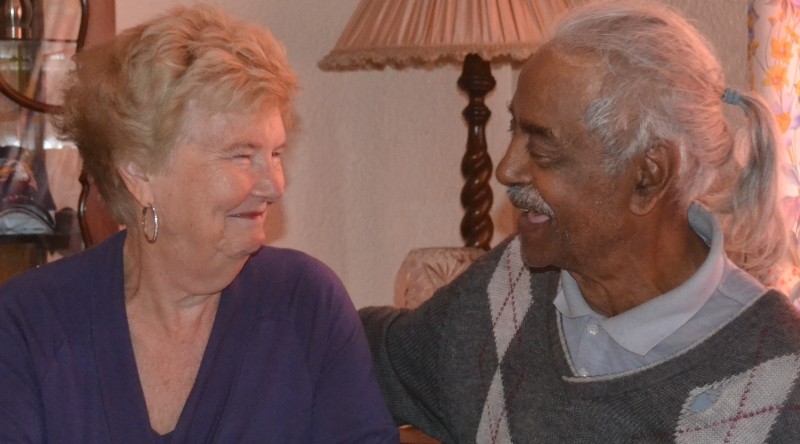 ATHLETICS Clipboard caught up with popular and highly respected athletics coach Edward May (84) on his annual pilgrimage to his motherland South Africa.

He is in Cape Town with his long-time friend Bea Olorenshaw.

May, who has been living in Calgary, Canada, since 1980, has a distinguished record as an athlete, sprint coach, and track official. He was the boys under 19 sprint champion in 1950 when the South Africans championships were held in Durban, and during the 1960s and 1970s, was the leading athletics coach this side of the apartheid divide.

Since his move to Canada, he coached at several schools and universities. There are tens of letters in his file (including letters from Calgary Track West and Athletics Alberta) that bear testimony to his excellent reputation as a coach of many decades.

May’s frequent visits to Cape Town have led to meetings with numerous South African former star athletes, including the late Kenny Roman whom he had coached in Roman’s heyday (1960s).

“I worked with Roman when he was doing weight training in the garage at his parents’ home in Kensington,” recalls May.

May and Roman (and others, including Robin April) would have started a coaching clinic in Cape Town this year.

The two had met at May’s home in Cape Town, (2015) and were planning another visit this year.

Says May: “There were major plans in the pipeline, but unfortunately Roman passed away. He wanted me to help him set up the coaching clinic, but, of course, it did not materialise.”

May’s emigration to Canada in 1980 is a long story about his daughter Jackie who had been promised an overseas trip should she do well at the University of Cape Town. Jackie ended up in Canada via England.

May and his family travelled and lived in several European countries including Germany, Portugal and Spain before making a final decision.

The family then moved across the English Channel  to their daughter, Jackie,  in England.

Soon afterwards, the entire May family moved over to Canada.

May had another daughter, Sandra, who was an excellent athlete in the girls under 14 and 15 age group and beat other young talents such as Gillian Kay of Livingstone High School and Dianne Carelse of Alexander Sinton High in the 100m and 200m.

“Both Jackie and Sandra were track athletes,” May says.

In 1979, as an under 15 sprinter, Sandra won the 100m and 200m at the Champion of Champions at Athlone Stadium. At the South African Senior Schools Sports Association (SASSSA) athletics championships in Paarl, she won the 100m and 200m, beating the Transvaal and WP athletes (E Parker and Kay respectively) into second and third place.

Sandra May passed away in 2015, before her 51st birthday.

Eddie May was born in October 1931 in District Six close to where the Seven Steps were and across the way from his childhood friend Richard Rive.

“I lived in Ayre Street and Richard lived in Caledon Street in a triple story with a balcony facing our place. He shouted from there when we used to go and climb the mountain. The triple story was called Winter Gardens,” recalls May.

Rive, of course, masterminded high school athletics in the early 1960s, and hand-picked the legendary Cecil Blows as the first and only convener of the first Champion of Champions at Green Point Track in 1964.

After his schooling, May apprenticed as a panel-beater and in time developed and owned a hugely successful panel-beating firm in Cape Town and in Canada.

May has assisted tens of athletes and clubs financially over the years and is a master at fundraising.

In search of the athlete Jan Botha

As an athlete, May remembers some of his earlier races.

“There was a sprinter from Paarl who attended Hewat Training College. His name was Jan Botha. I ran against him in Paarl.”

Many of his contemporaries are no longer alive, but he would like to know the whereabouts of Botha.

May was a member of the Trafalgar Amateur Athletics Club and Aerials at different times of his athletics career.

May took up sports administration and coaching, but it was the latter that distinguished him in athletics.

He was also a qualified starter, an official athletics position he held here and in Canada. May had quite a bit to say about the quality of starting here.  He felt many of the starters were too quick from set to go.

May was particularly dedicated and enthusiastic when it came to his passion of coaching sprinters. Looking back, he is extremely satisfied and proud of what he has achieved as a coach during apartheid (the segregation of whites from blacks).

“I have developed and coached a great many sprinters. We used the ash track at Hewat. We jumped over the fence (coach and athletes), only to be told to leave by the police. When the police left we jumped back over,” he says.

Godfrey Williams, a physical education lecturer at Hewat, did not like the idea of May and his athletes training there because they were not Hewat students.

“Hell, that guy was stubborn, he wouldn’t let up, but Rive and Joemat Idas paved the way for us to use the track,” says May.

“There was one athlete who sat in the background. I asked him to join us. I developed him and worked him. He eventually ran the SA 200m record of 21,3 seconds in Paarl in 1974,” says May.

The athlete was Gareth Mclean, his favourite.

“All the mistakes I made on the other athletes I could rectify on Gareth. He was perfect,” says May.

May’s home was open to many athletes who slept there and were fed there.

May was conscious of the nutritional needs for his athletes.

“My family and I would sleep in the caravan, and the athletes in the house,” he said.

Sundays they would go and train on the sand in Muizenberg and on other days at Rhodes Memorial.

May was strict and almost severe to a point in training his athletes.

“The satisfaction was that nearly all of them were champions,” says May proudly.

May is also pleased that many of them made a success of their working careers.

‘Sprinters must be good dancers’

May has the theory that sprinters must be good dancers.

“The best sprinters have rhythm. I used to take my athletes to dances to improve their rhythm,” recalls May.

He assisted his athletes in various forms.

His panel-beating skills helped him to make starting blocks for his sprinters.

“As a panel beater, I made starting blocks from flat steel. Andy James still has a set,” he says.

He also coached athletes of several high schools, including South Peninsula High School at the time when Georgie van der Ross was the PT master.

May is a fountain of knowledge and information. The man spoke of a great many experiences on the track and off the track, including Rive, Derrick Naidoo, Peter Meyer, Colin Barendilla, Georgie van der Ross and a great many more people.

Extracting the relevant parts, for now, May made a glaring observation.

“We are sitting with more athletics talent in Cape Town than in the whole of Canada because of the number of high schools – this number includes both white and black high schools. There is no reason why Cape Town and South Africa could not be in the forefront of track athletics.

“Canada has a small pool of athletes. Many of its athletes come from Africa and the Caribbean,” he observed.

(Eddie May was interviewed by Clement du Plessis, April 2016) 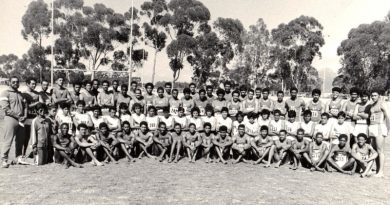 From Smith to Vester, Sacos stars capable of beating the world 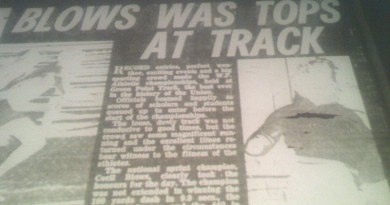 Ace track man Davids is back

11 thoughts on “More talent in Cape Town than Canada, says legendary Eddie May”